The grace of the Lord Jesus be with His people

Brothers and sisters in Christ, herewith the papers for General Synod.  (Women in the Episcopate)

People are encouraged by the Rural Dean to send their views on this to
Paul Boyd-Lee, Manor Farm, Horsington, Templecombe, Somerset BA8 0ET,
email: paulbl@btinernet.com
Graham's summary, presented at Synod on 5th June 2013 is as follows:
Women Bishops – to be debated in July Synod – new proposals with greater simplicity, & assurance that those who dissent are loyal Anglicans.
5 principles:
all orders open to all, without reference to gender
All must acknowledge that CofE has made clear decision
Recognise that CofE decision is set in broader context of whole church of God
Commitment to enabling those who dissent to flourish within its life and structures
Pastoral and sacramental provision made without time limit for those who dissent.
Four options to General Synod:
Simple clause, favoured by House of Bishop, relying on trust
New act of Synod defining arrangements for dissenters
New act, and retain some elements of the 1993 (Resolutions A,B,etc) in law re priestly ministry
To include everything in law.

Sixth meeting of the Fifteenth Triennium

This Synod report covers the four meetings that took place during 2011 due to the third meeting in 2010 being delayed until January 2011 to give extra time for preparation for the major topic.

On January 10th the Synod met at Yetminster Parish Hall. 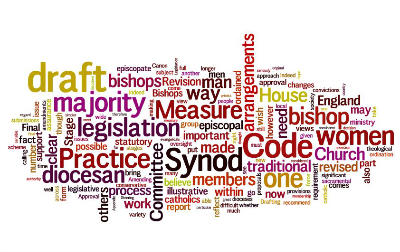 The main topic for discussion was Women in the Episcopate.

James Humphery (a long standing member of the General Synod and former Lay Co-Chairman of the Salisbury Diocesan Synod) outlined the historical perspective, the principal arguments for and against women bishops, the legislative challenge covering the consecration but also arrangements within the Church of England for those who cannot accept this development. Lastly he covered the Code of Practice which will not be devised until the legislation has been finally approved which will be in about two years’ time. This was followed by a discussion in groups about whether the unity on the measure is an illusion and if so does it matter. After this there were the normal sections of the meeting concerning Finance, Sudan, Notices and Pastoral Matters.

The two main topics of the evening were the presentation by Revd. John Rothwell, the Anglican Chaplain to Yeovil Hospital and Women in the Episcopate. The Revd John Rothwell spoke about the remit of the work of the chaplaincy in the hospital outlining recent developments in the care at the hospital and the opportunities this has given for witness and service. Then Women in the Episcopate was discussed for a second time and a vote was taken about the proposals despite the feeling that more time should have been allowed for parishes to debate the matter. The outcome was that the meeting supported the principle and the measure.

On  June 28th the Synod met at Hilfield Friary.

The third meeting of the year was the first meeting of the new Triennium and was held at Hilfield Friary on 28th June. The main items on the agenda were a talk by Brother Damien about the Friary and its work as well as a talk by Mrs Lizzie Whitbread, Salisbury Diocesan Adviser for Work with Young People. Brother Damien welcomed everybody to the Friary and outlined the recent changes at the Friary in the context of the wider Franciscan movement in this country and the history of the community at Hilfield. The second presentation by Mrs Whitbread focused on how the Deanery could reach out to young people. She outlined the resources available through the Diocese and encouraged the Deanery to draw up a plan on how to engage with young people.

The last meeting of the year took place at Bradford Abbas Village Hall on 9th November.  The main topic for discussion was the Anglican Covenant and Gil Williams gave an excellent presentation about the Covenant. There was a group discussion on the issues raised and a plenary session followed by a vote. The clergy voted 7-0 in favour, and the laity 28-1 in favour, with one abstention. The rest of the meeting was taken up with Reports, Notices and Pastoral Matters.  James Craw. Sherborne Abbey.

On November 22nd the clergy met for Consultation at Hilfield Friary

" The thing I would love to see happen in the Deanery, that would bring together people from different parishes and benefices, and I would be glad to give a lead in making this happen."

Lambeth Declaration, signed by major faith leaders in Britain, is launched at Westminster.

A worship leader describes the extraordinary story of a group of death row prisoners, known as the Bali Nine, who sang his well-known song as they were shot
Earlier this year, the worship song ‘10,000 Reasons (Bless the Lord)’ was sung by a group of prisoners as they faced a 13-man firing squad in Indonesia. Speaking to Premier, worship leader Matt Redman, who wrote the song with Swedish songwriter Jonas Myrin, described the incident as ‘profound’
The prisoners in question included ‘Bali Nine’ ringleaders Andrew Chan and Myuran Sukumaran, who had been on death row for almost a decade for drug trafficking. All but one of the eight had turned to Christ since the start of their incarceration.
‘They had become Christians, full on life-transformed, and they were transforming other people’s lives,’ explains Redman.
That’s the most amazing act of worship I’ve ever heard of
Despite protests from across the globe, the authorities decided to uphold the death penalties. But when the day came for them to face the firing squad, something extraordinary happened. The prisoners declined the offer to wear blindfolds and instead stood and faced their executors. According to witnesses, they recited the Lord’s Prayer, embraced one another, and sang two songs, ‘Amazing Grace’ and ‘10,000 Reasons’, before their voices were drowned out by gunfire.
‘They sang one song after another, praising God,’ Pr Karina de Vega, who was present at the execution, told Fairfax Media. ‘They sang a few songs together, like in a choir. The non-Christian I believe sang from his heart. It was such an experience.’
Reflecting on the incident, Redman says: ‘I don’t think it gets more profound than that. Firstly, as a worship leader, that’s the most amazing act of worship I’ve ever heard of. Secondly, it tells me that you can face anything in this life and still be found with a song of worship on your lips, even a firing squad. And thirdly, I just thought, “how did that song end up there?” What an amazing thing.
‘These are the things that I love; when things are immeasurable. Sometimes people are looking at charts or the song has sold this many, or this many people showed up at a worship event. Forget all that stuff. What’s the stuff that’s immeasurable, that you can’t really put a figure on? That’s the stuff I love. There’s no way of measuring that. It’s just profound, it’s immense, it’s intense. It’s wonderful, beautiful. That’s the stuff I want to do in ministry.’

is here to serve you and your parish.  Are you an agency, clergyperson, leader or employee of a voluntary or statutory body? Do you know anyone who needs food? To make a referral contact Linda - Foodbank Co-ordinator. Please do phone for anyone you know who is hungry or in need. It's really easy. The only questions you will be asked are where to deliver, how many in the family and what dietary requirements. You have to do nothing else.

Yeovil Street Pastors had its conception in late 2008 with representatives from local churches, the police and the council agreeing to form the initiative after seeing it work so well in other areas. The Street Pastors have been patrolling the town centre since April 2009. Yeovil currently has approximately 50 Street Pastors and 20 Prayer Pastors with small groups of these spending each Friday and Saturday night amongst the "night-time economy" of Yeovil's town centre. 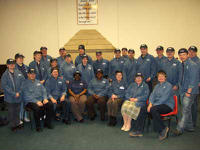 The Street Pastors engage with all people no matter their age, state of drunkeness, or religion. They listen, care, and help where they can. They are well received and respected in the town with shouts of thanks and photos for Facebook a regular occurrence of a night. Many comment on how they feel Yeovil is a safer place to be now.

Detailed background on the Covenant

The full text of the Covenant

Deliver food donations to  Sherborne Abbey basket or place your gift in the Food Bank Box at Sainsbury's or Waitrose's stores in Sherborne for collection.

A Diversion - But Interesting Anyway:

Dogs Without Collars is the result of a group of Dorset Vicars having an excess of Rock and Roll aspirations over talent. Despite individual group members having (amongst other things) had lorries take out the front of their church or appearing on "The Weakest Link", the desire for fame (and to make a lot of noise) drove them to meet in secret at the clergy equivalent of Rockers Anonymous, much to the relief of their wives and families.  (www.dogswithoutcollars.com). 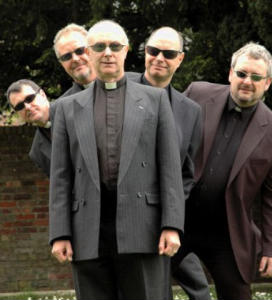 Coming together at the start of 2006, these five sad individuals decided to offer their limited talents up to the derision of their friends and congregations by playing cover versions of (until now) much loved rock and pop classics including "Stand By Me", "Day Dream Believer", "Rocking All Over The World" and assorted once-beloved songs by people as diverse as The Beatles, Pink Floyd and Mott The Hoople. So far, they have not played the Hammersmith Apollo or the Marquee but they have played Blandford Forum URC Church Hall and are pleased that Wembley is now up and running - nicely in time for their 2012 "Interesting Smells" Tour (because it would be nice to see a game there).

Exploring rather MORE than our locality...
http://www.newgrounds.com/portal/view/589217
Zoom from the edge of the universe to quantum foam
and learn about everything in between...
A FASCINATING AND ABSORBING GAME

To Get Into Church Of England Facebook Communications
https://www.facebook.com/churchhousecomms