The grace of the Lord Jesus be with His people

The Benefice of Sherborne Abbey with Castleton, Saint Paul's, Sherborne, Lillington, Longburton and the Gryphon School.

" To know God and to make Him known in wonder, love and praise."

A warm welcome awaits you at the Abbey. Founded by St. Aldhelm in AD 705, the Abbey has developed from Saxon cathedral into the worshipping heart of a monastic community, and finally, to one of the most beautiful of England's parish churches. For many it is still the 'cathedral of Dorset', and our Benedictine heritage lives on in the daily offering of prayer and praise.

If you have never visited the Abbey, we hope that you can do so soon. Marvelling at this glorious building, may you also catch a glimpse of the Glory of God - so that, having arrived as our welcome guest, you will leave renewed, as a pilgrim.

Since Norman times, a church has stood where St Mary Magdelene's stands today in Castleton.  Sir Walter Raleigh demolished the original and built a very inferior alternative.  The current building was finished in 1714 thanks to the 5th Lord Digby.

Outside the curtain wall of his 12th century castle, Bishop Roger of Salisbury built a Norman church to be used by his tenants and retainers.

The little Norman building was still standing in its tiny churchyard when Sir Walter Raleigh first came to Sherborne in 1592. Raleigh demolished the old church and he built a new one where the present church of Castleton now stands. The new building, finished in 1601, appears to have been structurally a very poor substitute for the 450 year old church he destroyed, since it was described as very ruinous a mere hundred years later (a lesson to PCCs everywhere today).
It is possible that the new church may have suffered damage in the two sieges of Sherborne Castle during the Civil War. Whatever the cause the 5th Lord Digby built the present church in 1714.

The layout of the new church showed a break with earlier tradition. Now the object was of emphasis is the Bible and preaching. Chancels at this period disappeared or became, as at Castleton, mere recesses. To begin with the new church had an east window, but soon after this was blocked; its outline is still visible on the outside. The church is remarkable in that, while it was planned as a preaching church, it continued the Gothic tradition in its arcades and window arrangement; it must have been one of the last to be built like this. More than a hundred years were to elapse before Gothic was revived as a church style in this part of the country.
The church is full of character, and was justly admired by Alexander Pope who wrote: ‘The next pretty thing that catched my eye was a neat chapel for the use of the town’s people (who are too numerous for the cathedral). My Lord modestly told me he was glad I liked it, because it was of his own architecture’.

St.Paul's at the Gryphon

St Paul's is a lively and growing evangelical, Anglican church for all ages.  Since 2006 the main Sunday service takes place in the Gryphon School but there is also a wide range for both young and old, many of which happen in the church building in St Paul's Close.  We believe that faith isn't just for Sundays and that God is interested in - and wants to be involved in, the whole of our lives.

St Paul's is a group of people who have discovered that God loves them with no strings attached, has a purpose for their lives, and is a faithful friend trhough all the ups and downs of life. 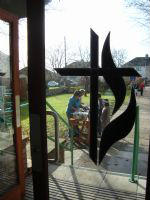 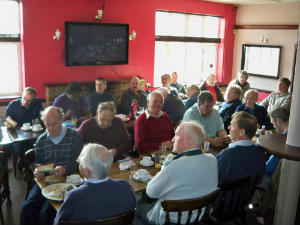 St Paul's is a lively and growing Evangelical All-Age church that represents the community in which we live, work and worship.
As a community we are committed to becoming increasingly God honouring, Christ centred and Spirit led in every aspect of our discipleship.

We believe that this is possible through:
Studying God's Word
Intimate worship
Prayer
Growing disciples
Engaging in mission
Openess to the Holy Spirit

We operate from two venues

A fairly informal service with worship led by a band, relevant bible teaching, opportunity for prayer and a full Children/Young People's programme

4th Sunday of the month 9am

St Paul's-in-the-Close is also home to a number of activities running during the week which aim to support the local community -  find out more.

For info on any of these church building go to http://www.dorsethistoricchurchestrust.co.uk/

For further information on church buildings of Dorset go to http://www.dorsethistoricchurchestrust.co.uk/

The Abbey, Castleton and St.Paul's share the same Church Council and are thus grouped together below. Lillington and Longburton are separate parishes.